Showing posts from January, 2010
Show all

January 28, 2010
I happened to watch the Republic Day Parade after a really long time. For most part of it, the entire Rajpath was covered with dense fog with visibility of barely few meters. However, it was a memorable event to see the exhibits from all the wings of Indian military forces displayed. Unfortunately I missed the distribution of Gallantry awards, but heard about it from Meghana and was filled with extreme pride. Because of such people, we all can have a sleep at night and can enjoy our time with family. But as Pranav said in one of his FB updates, even I wish to see an RD parade WITHOUT any Gallantry awards. Not sure when would that day arrive, but I surely hope it happens at least in my lifetime. In the later part of the Parade, it had the "Rath" representing various states in the country. This was the point where I got really disappointed. I felt, most of them were doing it just because someone in the government asked them to do. For example, Tripura showcasing the contribu
1 comment
Read more

January 17, 2010
I happened to visit the "The Place" next to West End, Arora Towers for my lunch on Saturday afternoon. While reading the menu card, I read that this was the inventor of the food type "sizzlers" and it was mainly invented to keep the food hot until you are done! The menu card had written the history of this food type, starting from 1963 till date and how it traversed various places before "The Place" was started. I like the sizzlers served here and have come here often. Yesterday we ordered "Tandoori Paneer Shashlik" and some "Pram Gramaldi"(?). When the hot plates arrived, I felt that the quantity has been reduced and we were wondering whether to order something more. Fortunately we waited until the plate was finished and we realized that we're actually Full!! There have been multiple outlets in Pune now which serve the Sizzlers - the famous ones those I know of include "Yana", "Kobe's". Out of this Yana on
Post a Comment
Read more 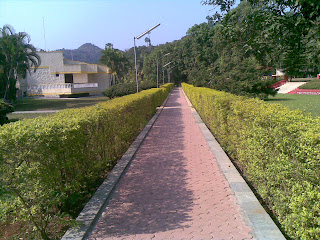 Albeit late, let me wish you all of my readers a very happy, prosperous and joyful New Year!! May this year starts bringing out the best in you!! Two things have happened since my last blog post - one have entered the last year of the first decade of 21st century (or first year of second decade? doesn't matter ;)) and I celebrated my 33rd birthday couple of days back. At times it hurts to look at the number "33" but yeah that how it is... To spend some time with Meghana and Mrunmay, we took a short vacation and headed to KarnaLa . This place is located on Mumbai-Goa Highway about 15 Km from Panvel. There is a fort and a bird sanctuary nearby. Few of you have already visited the place or might have heard about it. For those who haven't been there, this is a good weekend getaway. We headed to KarnaLa on Friday morning and to cater for Mrunmay's hunger times, we had to take the break immediately a fter hinjewadi - Joshi Wadewale. This outlet has grown so much si
Post a Comment
Read more
More posts